I thought I’d write another update to the blog, and I’m thinking about possibly getting back into regular blogging. (Maybe. We’ll see.) I’ve had it with Facebook and I never really got into Twitter, but I feel a little isolated without some social media interaction, especially as I’m on sabbatical again, and working on my own. I’ve also been inspired by Notorious Ph.D., who restarted her blog about a year ago. So I know it can be done!

Anyway, a couple of quick and largely happy updates. First, I wrote another thing inspired by my blog, this time an op-ed piece in the Chronicle on getting over a post-tenure funk. You can read it here. Btw, I did NOT choose that headline. (Writers rarely do.) But anyway, that’s *two* publications that came as a result of this blog (the other of which I mention in the post below), which I never expected. They’re non-scholarly, but I see them both as a kind of service to the profession, which was always how I thought of this blog, too (well, when I wasn’t writing about running or dogs or such).

Second, and related to an update in the post below this, I broke two hours in that half-marathon I ran last year — 1:59:24! Woo hoo! I trained again in the fall, but repeated minor injuries and a busy schedule kept me from doing a race. And then a really busy semester in the spring kept me from running entirely — d’oh! But I’m getting back into it now, and I’m planning on training again for a fall half-marathon, and depending on how that goes, maybe training for a *full* marathon in the spring, a thing I haven’t done in 10 years. A sabbatical year is the only time I’ll be able to fit it in, so it’s now or never.

Thing the third: a very happy doggy update. In the post below this, I reported the sad news of Pippi’s passing. Right after that post, we began fostering another Brittany named Benny, who a year ago found his forever family. And then we took a summer off from pets and fosters. I realized that as I worked at home every day while Bullock went off to the office (he’s chair — he has to be on campus) that the house was an empty and sad place without furry energy to fill it. It took some time to convince Bullock that we really needed another dog, and we may have moved a little fast for him, but on October 1, 2016, Æþelþryð Matilda Wigglesworth — or more simply, Audie — joined our pack. 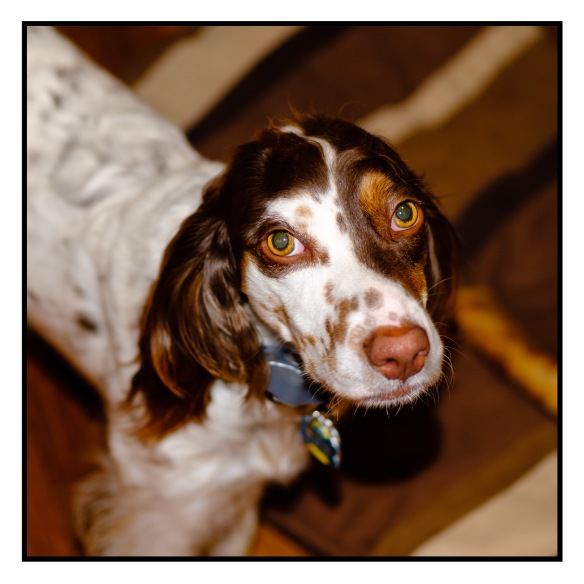 Æþelþryð Matilda Wigglesworth — Audie, for short. (You see, Audrey is the Anglo-Norman version of Æþelþryð, also spelled Etheldreda, and Audie is the diminutive of Audrey. She came to us named Molly, so I was looking for a name that sounded similar to that and landed on Audie.) That box on her collar is the invisible fence receiver. She’s a fence-climber if there’s a squirrel on the other side. (Photo by Bullock. Not to be shared or reproduced elsewhere without permission.)

No, she is not a Brittany. She’s an English Setter. It’s kind of long story how we ended up with a Setter instead of a Brittany, but the short version is that I fell in love. Anyway, since she’s English, I named her for an English saint and an English queen, and gave her a fake English last name (she *is* very wiggly). But I should have named her Wynnie, after the Old English “wynn” or joy, because she is SO full of joy — don’t let her serious look in this picture fool you. Just about everything makes her happy: walkies, treats, her Kong, the toy tied onto the end of a horse whip that we spin around for her in the back yard for her to chase, supper (she dances for it!), sleepy time, car rides, cuddling with her people, being with her people, her people coming home, people putting on shoes (because that could mean walkies!), the nice people who take care of her at boarding (though she’s even happier when her regular people come back to get her), nice doggies she meets, new people she meets, and so on. When you give her the “place” command to get on one of her beds, she *spins* in the air in a full circle as she leaps into the dog bed (because what comes next usually involves a treat).

The only thing she doesn’t like is her crate, because that means the people are leaving her alone and she can’t go anywhere — she’s much better left on her own in the family room with a Kong filled with treats, then she doesn’t mind being alone because she can look out the windows and lie on soft things that smell like her people, so she doesn’t feel so lonely. This is just one of the many ways that she’s different from Pippi, who loved her crate as a chance to be “off duty” and sleep. Pippi was territorial and barked at everyone who merely walked by the house. Woe to you if you were the UPS delivery person! Being in her crate was a vacation from her self-appointed job. Audie doesn’t have a territorial bone in her body, except where squirrels, chipmunks, birds, and cats are concerned. They’re the only creatures she barks at (well, and at us when she thinks it’s time for us to get out of bed). People coming to the door are potential new laps to sit in. (Oh yes, she’s a 35-pound lap dog. That’s also very different from Pippi.)

These differences from Pippi — including the different breed — are good things, I think. Because she’s so different, we’ve gotten to know her on her own terms. I think if we’d adopted a Brittany, we’d constantly see her or him as Not Pippi. Audie is just Audie. She’s her own fur-person. And the joy she brings is also restorative. Plus, I have a great office buddy — she loves to lie at my feet or in the upholstered chair in my office while I work. But right now she wants to go out, so I’ll wrap this up now. If I do get back to blogging, I promise more pictures of Audie — and I’ll make her her own page, too, just as Pippi has.

So what’s up with you since I last blogged?

Add to the Discussion Cancel reply